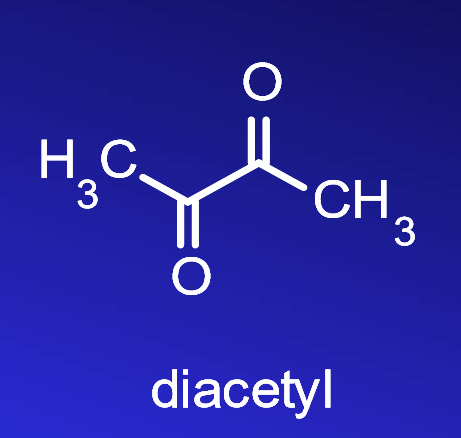 There are a number of flavoring chemicals that have been linked to occupational lung diseases, including asthma, bronchiolitis obliterans ("popcorn lung"), and interstitial lung diseases. The most prominent of these chemicals are diacetyl and 2,3-Pentanedione.

Flavorings are mixtures of natural and manmade ingredients that are added to the foods that we eat every day. Often times, the workers who make these flavorings or the end-products (for example, microwave popcorn or coffee), are exposed to high levels of flavoring vapors containing toxic chemicals like diacetyl and 2,3-Pentanedione.

Hundreds of workers have developed lung disease as a result of exposure to these flavoring chemicals, and there have been numerous verdicts in excess of $10 million in flavoring-related cases. Despite this knowledge, many food manufacturers, flavoring companies, and e-cigarette ("vaping") companies continue to use diacetyl in their manufacturing plants and in their products, thereby placing the entire consuming public at-risk.

Diacetyl is a diketone, which are compounds commonly found in paint stripping products. Diacetyl is naturally occurring and has a yellow or green tint. It provides an intense buttery flavor and smell. Diacetyl is often used in the production of microwave popcorn, coffee flavoring, creams, strawberry flavors, and a host of other flavors. 2,3-Pentanedione (also known as acetyl propionyl) is a similar diketone and is likewise a toxin capable of causing popcorn lung and other obstructive lung diseases.

"Popcorn lung" is a rare, irreversible lung disease affecting the bronchioles, or the tiniest airways of the lungs. These tiny air ways become constricted when exposed to diacetyl, and over time, become scarred. This will eventually lead to severe impairment of the tiny sacs in the lungs (alveoli) where there oxygen you breathe is picked up by your blood. This impairment makes it more difficult for you to breathe. Over time, this condition can cause cell death in these air sacs where oxygen is exchanged for carbon dioxide.

There is no cure for popcorn lung. In severe cases, a person with popcorn lung will require a lung transplant. Unfortunately, if your body rejects the new lung, the most common outcome is the development of another form of popcorn lung.

Alan Holcomb has resolved hundreds of diacetyl-related lawsuits, and has won diacetyl exposure trials across the nation. Alan has resolved popcorn lung cases in California, Georgia, Illinois, Missouri, New Jersey, Ohio, Texas, and a host of other states.

If you have been diagnosed with popcorn lung or any other occupational lung disease (such as occupational asthma), please contact the attorneys of Turnbull, Cain & Holcomb at (404) 793-2566 for a free case evaluation.